The Plouray Centre (Druk Toupten Tcheukor Ling in Tibetan) – The Dragon’s (Drukpa’s) garden where the Dharma wheel turns – is a Dharma Centre dedicated to study and practice of tibetan buddhism of Drukpa’s oral tradition. His holiness Gyalwang Drukpa, Head of the lineage, is its spiritual authority; it is the European headquarter whereas the main monastery of the lineage is located in Darjeeling, India.

His Holiness went regularly to the Centre Plouray to teach and lead retreats. The rest of the year, its representative in Europe, the Venerable Tenzin Ngawang Drubpon Pagsam Yongdu, resides there.

This Stupa named “the good auspicious doors” was built by Bhutanese artists assisted by many volunteers and a few artisans. Designed by His Holiness Gyalwang Drukpa, it was consecrated in 1997. 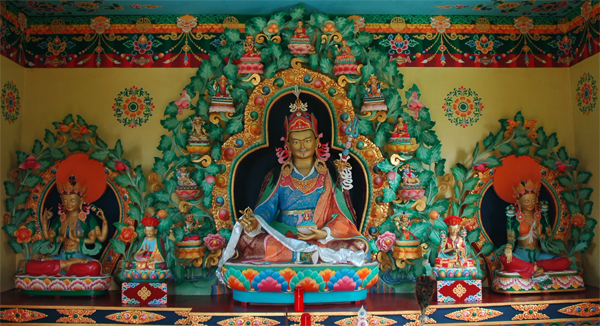 “A Stupa is not only built for glory and fame, but for its beneficial influence on the sentient beings, the area and the world, so that there will be no obstacles to the spiritual Masters’compassion activity, in order to maintain the existing intact and pure spiritual tradition, and to connect the Drukpa European Centre of Plouray to the first monastery of the lineage in Tibet, Shedroup Tcheukor Ling in Raloung”
The Twelfth Gyalwang Drukpa.

As the number of students attending His Holiness’ and other great Masters’ teachings is regularly increasing, the building of a Spiritual Hall has been foreseen on the Bel Avenir ground.His Holiness has drawn a rough draught in the TGV train when travelling from Geneva to Paris in September 2001.
Messrs Morvan and Le Solliec, Lord Mayors of Plouray and Gourin as well as Mr. Pierre Bleuzen, architect who realized the final plan as per His Holiness the Twelfth Gyalwang Drukpa’s instructions, participated to the inauguration of its building on the 27th April 2002.
His Holiness gave his first teachings in this Hall in September 2002. The Bumpa Ceremony took place on this occasion.

Conceived by His Holiness Gyalwang Drukpa, this center counts five houses for the retreats.

Individual retreat : opened to the practionners as well as to any person who wishes to temporarily withdraw from his daylly life and/or to discover the buddist center. An interview is required prior to a first request.
Collective retreats: during the teachings led by Drubpön Ngawang, the houses are shared on a basis of 4 to 6 persons.

A prayer was inaugurated in August 2008 by His Holiness the Dalai Lama.
The 6 meters high building which will shelter the prayer wheel is made by Lama Seunam, a specialist in sacred Buddhist art. The prayer wheel is a cylinder about 2 meters high with handles to spin it. The cylinder itself is just a container, the essential being inside : mantras imprinted on paper rolls wound around the wheel axle.

To spin around a prayer wheel means setting in motion the energy of the mantras it contains, spreading and diffusing this energy all around, thinking that it will not only be beneficial to the person who is spinning it but also to the infinity of sentient beings. In this respect, the prayer wheel at Plouray Centre is dedicated to peace and harmony in Brittany and throughout the world. 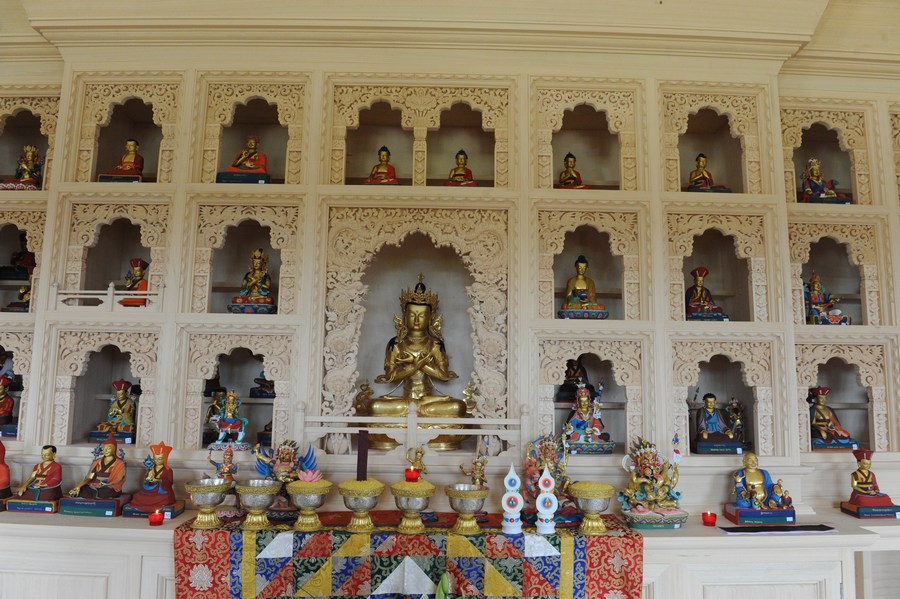 270 statues of Drukpa lineage Masters now dwell in the Lama Lhakang.  70 more should be sent  from Nepal soon. Some Bhutanese painters and sculptors stayed for several months in Drukpa Plouray centre in order to paint the statues and carve the furniture sheltering them.