It is Drukchen Dungse Rinpoche (Thuksey Rinpoche) who had the responsibility of the everlastingness of the Drukpa Lineage. He showed a great courage and an unshakeable great energy. Thuksey Rinpoche took as his father the tenth Gyalwang Drukpa and as his mother the Dakini Phurba Lhamo, daughter of Drubwang Shakya Shri. Thuksey Rinpoche was born in 1917 in Tsari, a sacred place, blessed by Tsangpa Gyare. His birth was accompanied with numerous miraculous signs. On the advice of his precious father, he went to study in the monastery of Zigar Rinpoche, in Kham. His main Masters were the seventh Zigar Rinpoche, Phatchok Rinpoche (his uncle, the son of Shakya Shri), the eighth Choegoen Rinpoche, Thutop Choekyi Gyatso, Lopoen Soenam Zangpo Rinpoche, from whom he received the instructions of the Drukpa tradition of Bhutan, and the great yogi Tripoen Pema Choegyal also known as Trulshik Dorje Chang.
Thuksey Rinpoche spent ten years of his life in solitary retreat. Thanks to such practice, he achieved complete control over the subtle energy of his body: day and night, even during the coldest winters, he would wear nothing but a cotton upper garment and a cotton loin cloth. Wherever he used to settle down, the snow and ice melted away. He strove continuously to find the new incarnation of the twelfth Gyalwang Drukpa. He went several times to Dharamsala to meet his Holiness the Dalai Lama, to request his advice and clear vision.
During his life, Thuksey Rinpoche developped a great activity for the sake of all sentient beings, notably in Ladakh where he undertook important renovations in the monasteries of the Lineage. He initiated the great annual public ceremony of one hundred million recitation of the Six-Syllable mantra. Similarly, this great recitation was instructed by himself in Darjeeling and other places where he erected representations of the enlightened Body, Speech and Mind.
He visited as well Kullu, Lahaul and Bhutan, and gave the spiritual Teachings and transmissions which ripen and liberate, so extensively that it is impossible to evoke them in detail here.
In general, he showed no interest in Teaching in the west and thought he would never go there. Yet one day, as his devoted western disciples continued to invite him to come to their country, he said: "Just as it is said in the popular saying, taken from the teaching, as the ant grows wings before its death and flies off into the sky, so shall I go there once."
He then went to France in 1982 and to other European countries. His devoted "yellow haired" followers, full of faith, gathered to meet him and he showered them with the nectar of Dharma. He also established the spiritual foundations in preparation of the future flourishing of the Teachings.
In such a way the foundation of the Drukpa centers took place throughout France and Europe. Soon after that single voyage, Thuksey Rinpoche left his body. The physical form he had displayed merged into the ultimate space of phenomena. He was sixty seven years old. 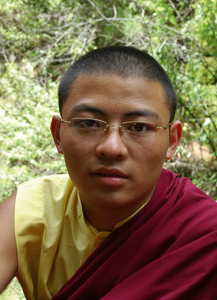 The Second Thuksey Rinpoche was born in 1986, on the tenth day of the first Tibetan month in Chushul, Ladakh. Prior to His birth several oracles and visiting high lamas told his expecting mother that the child to be born would be a great being, and that this special child should be presented to the Twelfth Gyalwang Drukpa as soon as he was born.
During the entire week before his birth, strange birds guarded Rinpoche’s house and a light pleasant drizzle of rain showered up upon the village. Unfortunately Rinpoche’s mother died at his birth.

The Twelfth Gyalwang Drukpa experienced many dreams and visions that Thuksey Rinpoche’s reincarnation would take place in Ladakh. In July 1987, Their Holinesses the Fourteenth Dalai Lama and the Twelfth yalwang Drukpa went together to Gyalwa Gotsangpa’s cave near the Hemis Monastery and meditated there for two hours. Through mediation the pure visions, both concluded that the special child born in Chushul was the authentic reincarnation of the First Thuksey Rinpoche. Shortly after, His Holiness Gyalwang Drukpa personally visited Chushul to pay his respect to the reincarnation of his first Guru and offer Thuksey Rinpoche the mandala of long life. After that His Holiness Gyalwang Drukpa asked the family to take good care of Rinpoche. The child surprised everyone present by knowing what was expected of him during the offering of mandala.

On 30th June 1988, when Rinpoche was two and a half years’ old, he left with His Holiness Gyalwang Drukpa for Druk Thubten Sangag Choeling Monastery in Darjeeling. Four months later, the young Rinpoche was formally enthroned at the monastery built by his predecessor. His Holiness Gyalwang Drukpa has since been taking care of the upbringing and education of the reincarnation of his Guru, just as his Guru had taken care of him.