Venerable Drubpön Ngawang, the European representative of the Drukpa Lineage

Venerable Drubpön Ngawang Tenzin Pagsam Yongdu was born at Chungkar, Buthan, in 1955 and has been residing in France for over 30 years. He is the spiritual head and practice Master of the Drukpa Plouray Buddhist centre and the representative of His Holiness Gyalwang Drukpa in Europe. 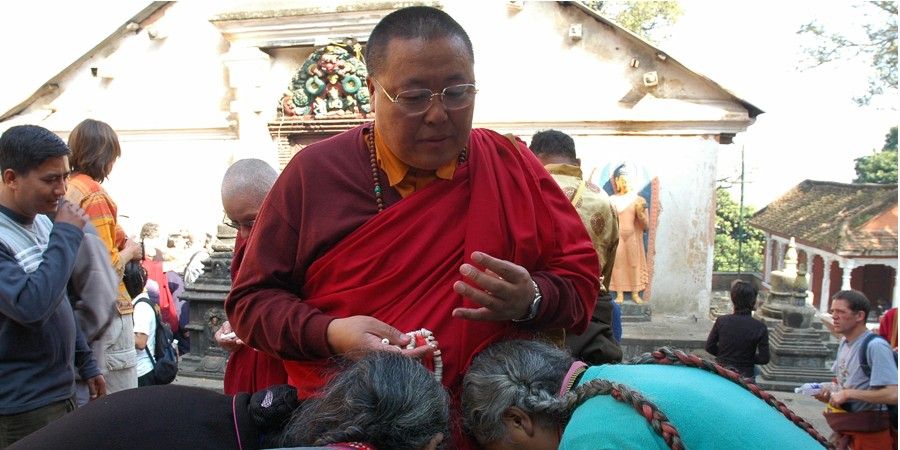 The venerable Drubpön Ngawang Tenzin by His Holiness Gyalwang Drukpa 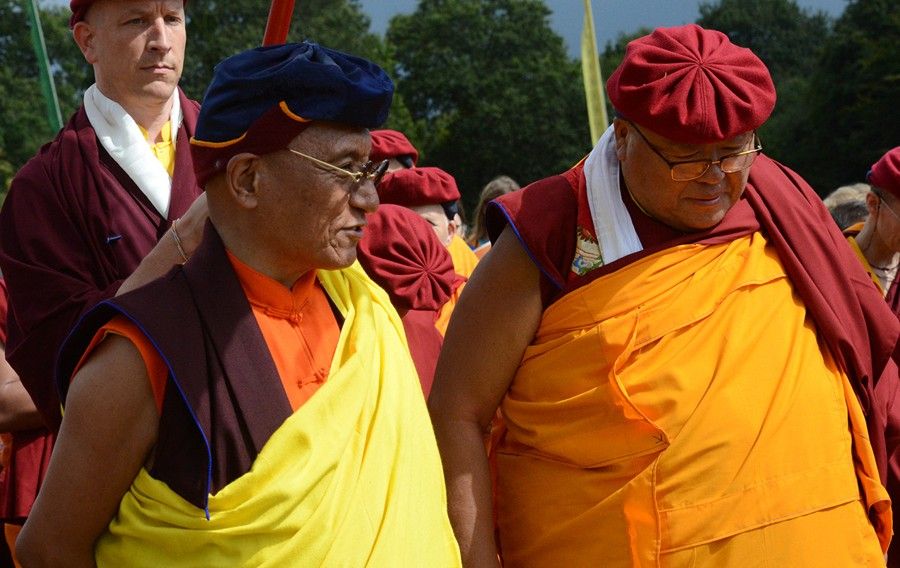 Drubpön Ngawang's ancestors were all excellent practitioners and some of them were even realised masters of Dzogchen in Bhutan, the country that still has the good fortune of holding the blessing of Guru Padmasambhava. In addition, his familial lineage has a great reputation of containing heroic personages in many respects. In regard to Drubpön Ngawang himself, his father was told by the late Dudjom Rinpoche that his son should be given to Thuksay Rinpoche, and I think that this was very significant in that His Holiness had foreseen that Drubpön's activities would be beneficial to many beings. As everyone can see, Drubpön Ngawang is a great helper to the Masters from whom he took teachings. This actually means that he has and is developed in his practice successfully. He has no interest to show or to talk about his realisation or anything about his own positive spiritual qualities. That in itself is a great quality according to my understanding, due to the fact that, unfortunately, we can easily be deceived by certain inauthentic masters who have many beautiful things to say about themselves. The only reliable way to judge a Drubpön is through his genuine moral practices, his Guru devotion, his simplicity of living and his skill of dealing with others. One must take time, I think, to confirm the Drubpön's qualities as being truly positive or negative.

We call Drubpön Ngawang 'Ngawang Chenpo' as 'Chenpo' in Tibetan means big. I remember that even when he was around 10 years old, he was quite big. He had a tall body with a beautiful plump face as he still has today. Anyway, that is his appearance, but I think he also has an enormous space in his inside which, when he was younger, allowed him the wonderful time that he had with his Guru, the late Thuksay Rinpoche, whom he served for more than 15 years, day and night. People would not even have an inkling of how hard, emotionally and physically, it is to serve a traditional master in a genuine way, unless they have read of Marpa, Milarepa or read some other genuine Master's biography. It is very rare and only truly fortunate people can joyfully serve their Master full time without a day of rest or a fracture of a doubt as did Ngawang! It is true that many of us have the fantasy of serving a Master from some romantic picture that is created in the temporal mind. However, that particular romance is hardly achievable for most common beings. I have seen many of them having a big problem in their head after having the fortune of serving their master, and subsequently, if they are smart enough, they will step back. If not, they will get burned by their impure vision of the Master and their doubt in the teachings. They will look down upon Dharma friends and sustain the special pride of being a special person. As a result of this negative impact, the activities of the Master will be disturbed and beings will not be benefited as the Master had planned.

Therefore, I would say that one has to be especially fortunate like Drubpön Ngawang to have completed such service with no difficulties in his mind at all. I can be the only witness, if you like, of his positivity of life with our Guru. His tolerance, simplicity, understanding and diligence in fulfilling the Master's wishes everyday with no questions at all really made me feel so appreciative. Not only that, he has achieved the same amount of benefit as tens of preliminary practices through his genuine service that he offered to his master. Therefore, he was one of the first and very few people to whom I taught high tantric practices. I had no doubt in teaching him whatsoever. Also, he did everything that was told to him to be done perfectly with one-pointed devotion. In fact, I was told by our great Guru, the late Thuksay Rinpoche, as one of his instructions just a few months before he passed away to take him as my student and guide him in meditation, with the additional prophecy that "Ngawang will never betray you and will hopefully serve you continually like he did me," and further requested me, "Do not forget to keep him within your love." Having that in my mind, I have a great trust in his helping me and my activities in running centres and guiding my other students who are in need of spiritual support.

"This brief description of Drubpön Ngawang's life and activities was written by me for website publication and is by no means a definitive account of his life as there are countless things I could say about him from my life with him, yet I would not like to tire your eyes. What I have written is to inform people and evoke their genuine motivation to be good practitioners of the Dharma in order to benefit all beings." 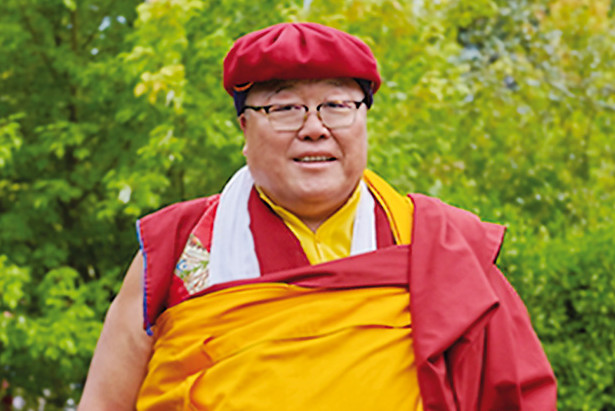 We have been facing a challenging health situation for about two years now, entailing great diﬃculties and pain for many people.

As for me, I have not been able to travel nor visit the European Centres, and we all miss the presence of His Holiness Gyalwang Drukpa and other great Masters. His Holiness is regularly asking for news about the disciples and the Centre.

As you know, we no longer organise retreats in presence at the Drukpa Plouray Centre, and I believe this situation will last at least until the Nyoung-Nay retreat scheduled for next November.

Though the health situation is diﬃcult indeed, there is yet a bright side to it, as the spiritual life of the Centre is thriving. Practices are performed daily and most are livestreamed, and we also organise online videoconference retreats. All this makes His Holiness very happy.

I very sincerely wish to thank the twenty or so residents and volunteers : the monks, nuns and lay persons who are involved daily in the practices, the livestreams and general everyday life.

At Druk Amitabha Mountain, His Holiness’ monastery in Nepal, the nuns also perform numerous daily rituals and study a lot. It is the same at Druk Thupten Sangag Choeling, His Eminence Kyabje Thuksey Rinpoche’s monastery in India.

In these peculiar times, we must take patience, courage and persevere. The situation will soon improve. Such is the law of impermanence.

My prayers go with you.

Here is the list of teachings given by Venerable Drubpon Ngawang Tenzin available on Drukpa Plouray's YouTube channel.